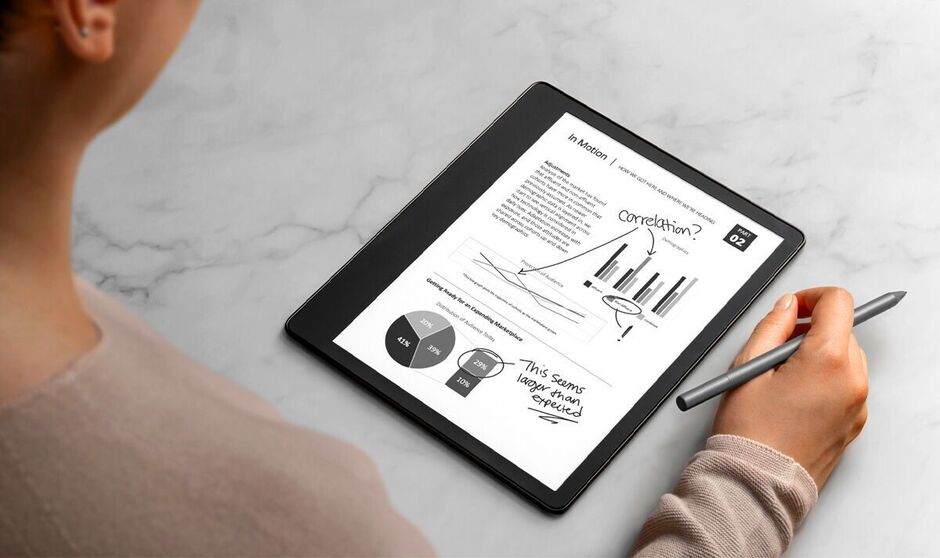 Amazon has launched a new Kindle that’s unlike anything we’ve seen before from the online retailer. Dubbed Kindle Scribe, this eReader lets you make handwritten notes in meetings, complete puzzles and exercises in ebooks, sign PDFs, and annotate documents using the all-new digital stylus. The latest Kindle was revealed alongside a rebooted Echo Dot, as well as a new sleep-tracking gadget, called Halo Rise.
With an upcoming software update due to roll-out early next year, Amazon says you’ll also be able to send documents to the Kindle Scribe directly from Microsoft Office. Documents can be synchronised between the Kindle and Microsoft Office on your laptop, tablet, or desktop PC.
With an expansive 10.2-inch display, weeks of batter life, access to the biggest ebook store on the planet, and a stylus that never needs to be recharged to make annotations in books, sign PDFs and more …this is the most ambitious Kindle ever launched by Amazon
Release date scheduled for November 30, 2022
Like all entries in the best-selling Kindle series, the battery life on the Kindle Scribe is measured in weeks – not hours, Amazon says.
To accommodate your handwritten notes, Amazon has expanded the size of the e-ink display to 10.2-inch. That’s easily the biggest display found on any Kindle eReader, comfortably beating the previous record of 6.8-inches (we praised that screen size in our Kindle Paperwhite review). For those who prefer a large font size in their digital books or want to read graphic novels or magazines on a Kindle, the Kindle Scribe looks set to be the best option – regardless of the new note-taking capabilities. 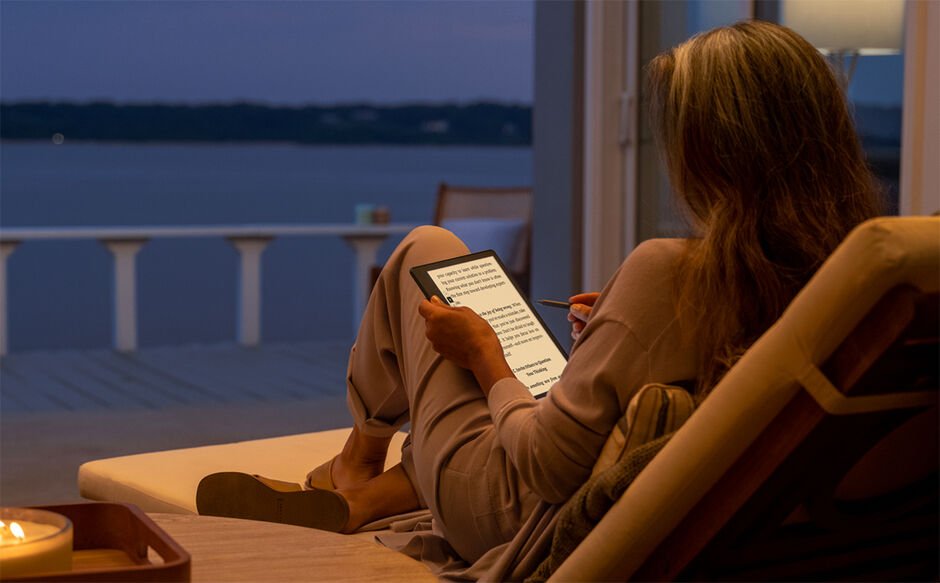 If you do want to make notes, Amazon includes a stylus in the box.
The US company says it’s worked hard to ensure the stylus feels identical to a pen when used on the glass touchscreen. When making notes, Amazon has added a variety of line widths, a highlighter tool, eraser tools, and an undo tool in the Kindle software. Everything is accessible within a new on-display writing menu. If you’re making notes in a fiction or non-fiction book, these notes will be tied to the point in the book where you started to write.
If you’re highlighting text, Amazon will use software to ensure you stays within the lines for a picture-perfect line.
Amazon has launched a Pen Pro stylus (at an additional cost) that includes an eraser on top of the pen, so flipping around the stylus and pressing it against the e-ink screen will undo your latest doodles. There’s also a customisable shortcut button, so you can switch between the pen and highlighter function, or open a new sticky note with a single tap.
Both Pen and Premium Pen do not need to be recharged. Ever. These styluses can be attached magnetically to the back of the Kindle Scribe 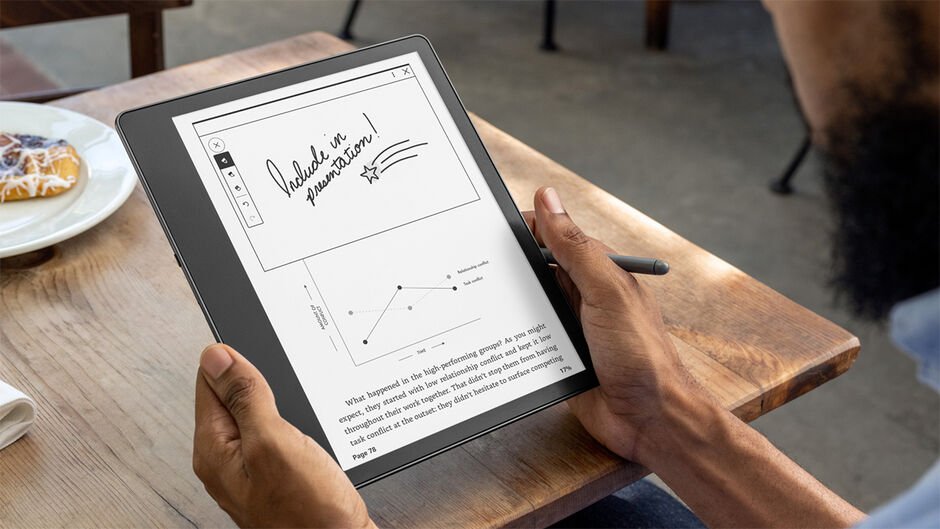 Any notes made on Kindle Scribe will be automatically saved and backed up to the cloud for free. You’ll be able to access these notes from any phone, tablet, laptop, or desktop PC using a web browser. Annotations or signatures made on PDFs will be saved and accessible across all devices. Using the existing Send To Kindle feature, which lets you email documents, notes or PDF, you can read or annotate anything on the Kindle Scribe, and then send back the results over email.
Kindle Scribe will be available at the tail-end of November, with prices starting from £329.99 for the model with 16GB of storage built-in. Amazon will bundle a stylus in the box, although you’ll need to pay extra for the Premium Pen, which includes the eraser and customisable shortcut button.
All Kindle Scribe models will ship with four months of the Kindle Unlimited subscription for free. 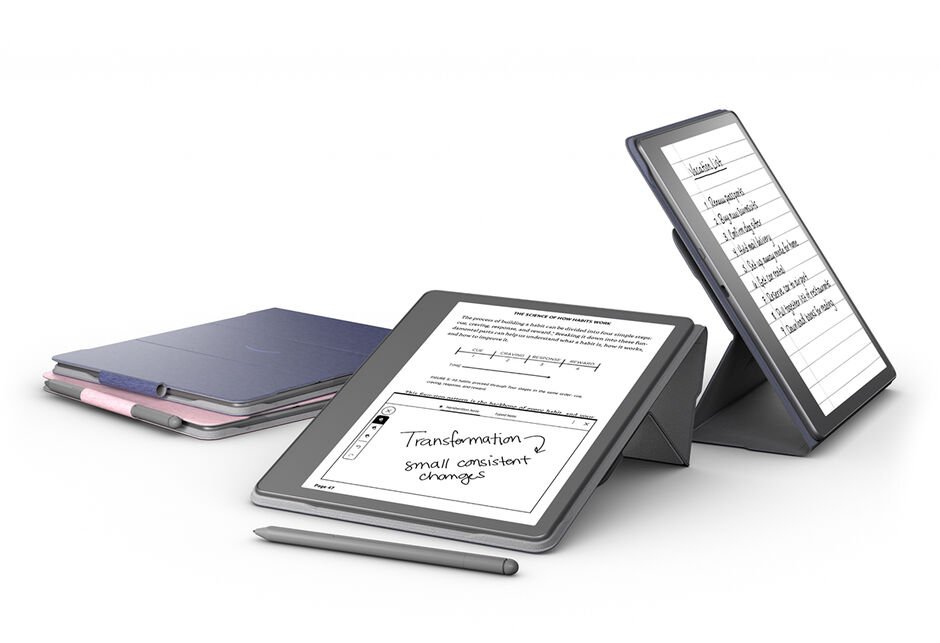 Upgraded Kindle Scribe models with 32GB and 64GB of storage will also be available, Amazon says.
To complement its new eReader, Amazon is launching a range of leather and fabric covers, which can be folded to support Kindle Scribe at different angles, which will be available soon. The Pen attaches to the back of the Kindle Scribe using magnets, something that won’t be interrupted with the new cases.
Kindle Scribe is built with 100% recycled aluminium and 48% post-consumer recycled plastics. The packaging is also made from 100% recycled materials too.
The all-new Paperwhite comes with a larger display, faster page turns, and 10 weeks of battery life – all in a waterproof design with enough storage to hold thousands of novels
The pricier Signature Edition has all of the features listed above, but also packs an auto-adjusting light sensor to manage the screen brightness, 32GB of storage, and support for wireless charging – a first for any Kindle!
See today’s front and back pages, download the newspaper, order back issues and use the historic Daily Express newspaper archive.

How to troubleshoot problems with your Microsoft Office installation – TechRepublic